The visual effects applied to all three videos position them in the realm of a futuristic hyper-reality while simultaneously resonating with the popular culture of low-fi imagery of youtube animal videos and gifs. Using humour and beauty, the videos explore the complex relations between species and the need for survival.

In consume repeat #3, the subtle violence of the exchange between the Pelican and the Pigeon is contrasted with the humorous and persistent method of the Pelican trying to swallow a large, moving entity. Organic gestures are mechanized into a loop, and the movements speak to habit, compulsion, obsession, and absurdity. 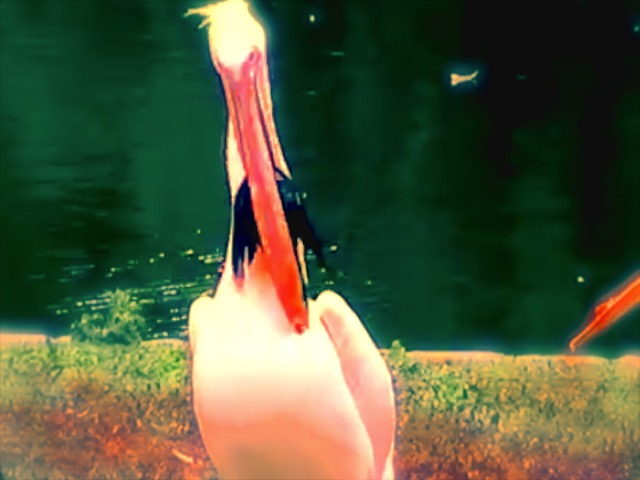 In consume repeat #2, the subtle violence of the exchange between the Monarch Butterflies is contrasted with the slightly humorous frailty of their bodies. Organic gestures are mechanized through the editing process, and the movements speak to habit, compulsion, obsession, and absurdity. 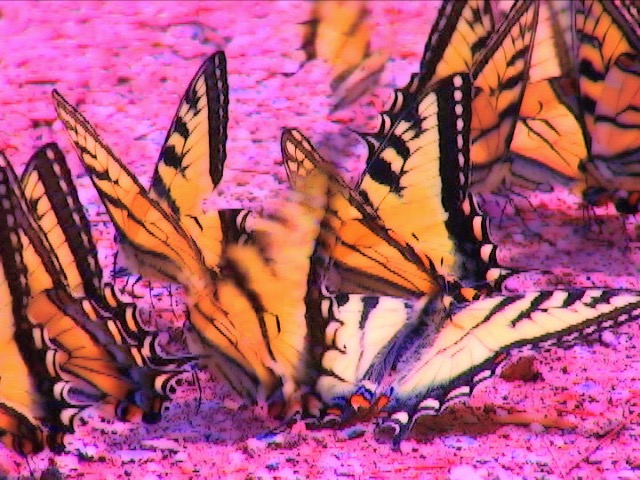 The metaphor of the butterfly effect – the notion that the minuscule flapping of the wings of a butterfly can dramatically affect the outcome of events in a larger system, such as weather – emphasizes the inter-connectivity of all entities and actions. When seen through the lens of isolated exchanges between insect bodies, this reveals the potential impacts of small violences, and the larger effects they can have. The piece seeks to reflect on what the flap of a wing might mean through repetition, as a flap is never in isolation. Although there is repetition, duration and accumulation deny repeat experiences, and through this repetition emerges the possibility for reinvention (Deleuze).

UsThemThemUs is a video comprised of statements extracted from sci-fi cinema in which characters attempt to articulate a boundary between humans and non-humans. These declarations of difference desperately seek to establish delineations between human and machine and animal, yet often resort to nebulous-to-define traits such as emotion, belief, or the soul. Rather than establish clear definitions of what the human is or is not, these attempts instead reveal a slippery space of boundary determinations. Also revealed are the anxieties and pejorative associations entangled with notions of difference and otherness, particularly when ‘the other’ begins to become the same…

The prevalence of films and TV series such as Bladerunner, Terminator, and Battlestar Gallactica reveal the modern-day anxiety surrounding the boundary between the ‘natural’ and the ‘unnatural’. Fragmented sentences extracted from these sources scroll through the video, overlap, become entangled and overwhelmingly incomprehensible at points. The delineations used to define the human – soul, emotion, or belief – are vague and intangible and do little to establish clarity between the human versus the non-human.

The visual fragments are sourced from online videos and show humans somewhat violently interacting with non-humans – in one clip and baby and child are attacking one another, and in another humans kick robots. Historically, humans have defined themselves in contrast to animals, which was also a continually complicated and fluctuating terrain, yet the contemporary threat is clearly becoming the machine. The response of the Robotic Dogs to the human kicks in the video shows the scientific breakthrough of the robot responding to an unexpected change in the environment and immediately adapting and stabilizing itself. This development is significant in the scientific community, yet also veers towards the actual realization of an artificial intelligence that has only been until recently, anxiously dreamed about by writers and filmmakers. As the machine and the human rapidly become closer in capability, we must contemplate the realities of what this new relationship with ‘the other’ will mean, and the potential manifestations that it can take.

Text and audio statements are all direct citations from selected films.

How to Identify a Witch references historically documented methods used to identify and prosecute a witch. The methods presented in the video, although seemingly bizarre, are sourced from witch hunting manuals, such as the Malleus Maleficarum (The Hammer of Witches), which were commonly used reference texts throughout the European justice system during the witch craze.

Simple animations created from illustrations and woodcuts derived from these texts serve to emphasize the absurdity and popular prevalence of the witch craze event, but also gesture towards the problematic belief systems that fostered the emergence of this crazed phenomenon that targeted primarily women and the socially vulnerable as ‘others’.

The Serpent & The Mouse addresses the understanding of the serpent as inescapably associated to the biblical story of original sin – The Fall – and problematizes the associations of this metaphor. The demonization of the female position in this narrative, namely Eve, who is forever after burdened with the bizarre notions of sole responsibility and eternal implications, is shown to be absurd both through its malleability and its metaphorical construction. The Serpent & The Mouse also shows a mouse being eaten by a snake. 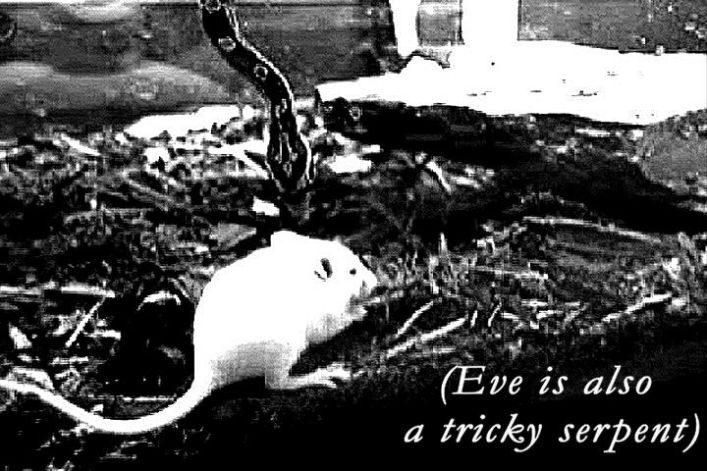 The same footage repeats eight times in various manifestations, playfully using text to complicate the understandings of the imagery, problematize the position of power, and to re-position the serpent with more ‘obvious connotations’. 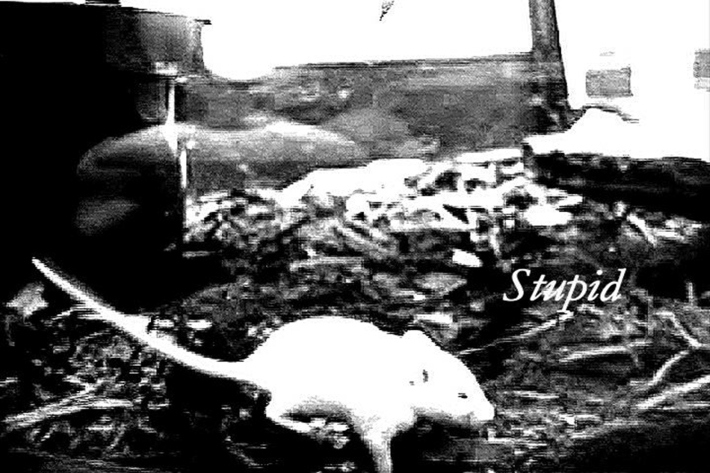 Pollination Proposition proposes an incongruous solution to declining bee populations – a beautiful yet abject human-mechanization of the pollination process. The productive yet eloquent transgression of species-boundaries between orchid and bee during pollination is mimicked in this performance to explore a potential dissolution of hierarchies between human, plant and machine. The Pinocchio figure transgresses the boundaries between human, plant and insect by repeatedly penetrating the orchid flower’s canal with an elongated nose; a sexually referential gesture enacted by an androgynous body that is digitally manipulated to appear mechanical and repetitious. 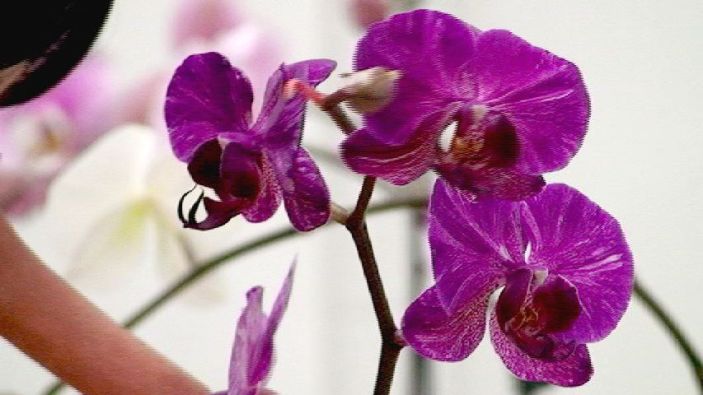 In light of recent reports of declining bee populations and manual human cross-pollination activities, this suggestive proposition highlights human intervention in the pollination process to emphasize the absurdity of such a gesture, while simultaneously acknowledging the complex and affective system of relations between heterogeneous entities. Pollination Proposition acknowledges an entangled system of relations, but more importantly, seeks to recognize intersections of difference as productive sites of exchange – change does not only occur between like species, but among entities of different orders, including between both organic and machinic organisms. Pollination Proposition blurs the distinctions between species delineations, natural and unnatural, gender roles, and performance and digitization to emphasize the potential for relations and affect to promote positive understandings of difference. 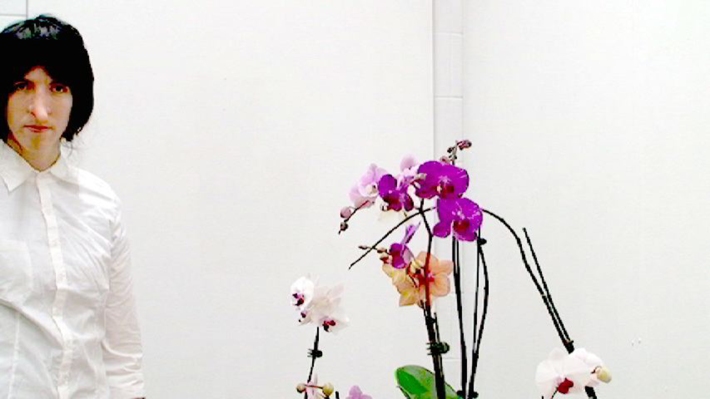 consume repeat #1 humorously explores the movements of Great White Egrets as they catch their morning fish, and when they score a particularly juicy catch, their run back to shore. Organic gestures are mechanized through the editing process, and the movements speak to habit, compulsion, obsession, and absurdity.

Although there is repetition, duration and cumulation deny repeat experiences, and through this emerges the possibility that repetition allows for reinvention (Deleuze).